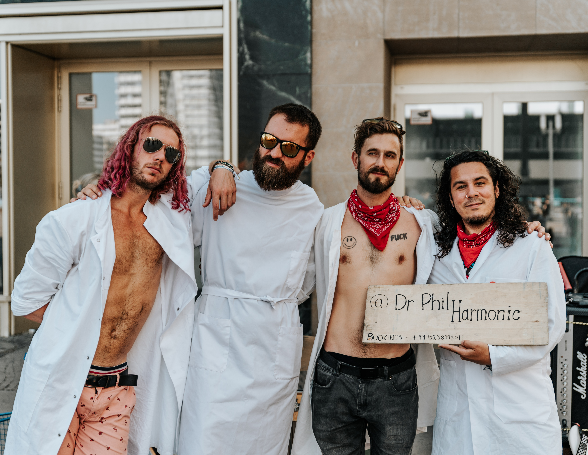 Dr. Phil Harmonic is a fairly new band formed in Berlin, consisting of friends who have been in the Berliner busking scene for a while and played with many other different projects: Todd (Buckit, Beranger), Geraint (Buckit, Level Spaces), Lucas (ex-Level Spaces, The Red Box) and Jan (Beranger, Sound Of Thieves) who decided in the summer of 2020 that it was about time to put to use the strong connection between them, both as friends and musicians. Within a couple weeks of jamming together, the „Doctors“ already had very consistent and eclectic act, and what begun just as fun became a serious project, with even more fun.

Through the positive energies, constant laughter, humouristic views, and limitless music, Dr. Phil Harmonic’s goal is to medicate the world with music and happiness!